6 Ways Storytelling Will Make You A Better Presenter 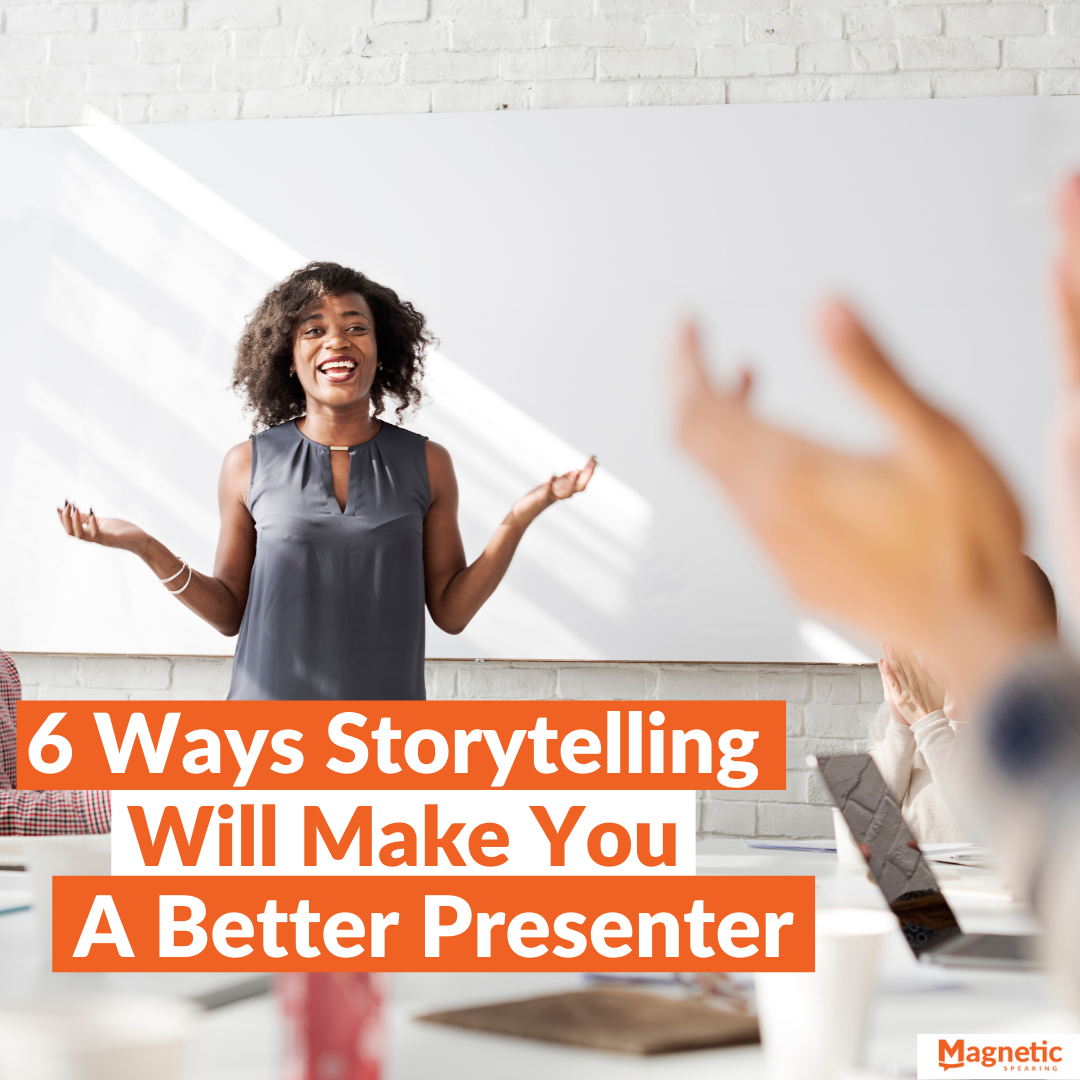 I remember when an executive told me that he was hesitant about telling stories at work. His company emphasized data, reasoning, and facts. He thought that storytelling was fluff and would cause him to lose credibility.

Does that sound like you? If you’re hesitant about telling stories at work, then you might be worried about losing credibility as well.

After working with thousands of corporate professionals at our company, I’m here to tell you that whether you like it or not, if you want to influence, then you must use stories in your presentations at work.

And in this article, you’re going to learn why (hint: you don’t use stories to gain credibility.)

Before I jump in, let’s clarify what storytelling is: it’s your ability to insert anecdotes anywhere in your presentation. Anecdotes like customer success stories, lessons learned stories, your personal story, study stories, and more. These stories zoom in to a specific place in time to make a point.

So let’s dive into 6 reasons why telling stories should be non-negotiable for the rest of your career.

1. Stories bring your audience’s guard down

One of the best ways to handle objections or skepticism is through a story. Instead of arguing with someone, a story will allow you to handle their objection elegantly. Simply incorporating a phrase like “I know some of you might be worried/thinking/concerned about…” followed by an appropriate story will do the job. Embedding the audience’s objection into the story is powerful because it shows that you understand the audience’s concerns.

Imagine that you’re presenting to the marketing team and you know some of them are skeptical about the proposal you’re making because it’s risky. While you do need to incorporate data and evidence into your proposal, using a story could help lower their defenses as well. “I know some of you are worried about cannibalizing our products in this proposal. But if we go back to 2007, Apple made a similar decision the day they launched the iPhone. They knew it would cannibalize iPod sales….” and then you could go into a story about Apple’s iPhone launch.

The power here is that your audience suddenly starts visualizing the story and stops placing as much attention on their objections.

What is typically more entertaining: a statistics class or an episode of Game of Thrones?

No offense to statistics teachers, but most people would pick Game of Thrones any day of the week!

Why? Because a story is more entertaining. There are main characters, plots, settings, adversaries, and mentors. If data is the vitamins and minerals, then the story is like the fat and sugars (and we know which ones people crave more of).

As a presenter, you can throw all the numbers you want at your audience, but that won’t engage and entertain them as much as an interesting, relevant anecdote.

If you’ve ever explained your reasoning to someone and received a blank look, it’s frustrating!

We see this issue so often, especially with our technical clients. You’re trying to explain something complex and end up using a lot of jargon and making it sound too abstract. It ends up being totally unrelatable.

Instead, by using a story, you’ll help the audience visualize what you’re trying to get across and make the point more concrete. And you’ll be surprised when it takes you less explanation to convince someone of something.

Most importantly, the story will help your audience relate to you and the material better.

You know you’ve made an impact when your audience is spreading what you’ve told them. Stories are naturally viral. They stick in our minds whether we like it or not and they’re hard to shake. Use this to your advantage when presenting.

If you’re a leader or a manager in your organization, a powerful customer success story could spread amongst your team quickly and remind them why they’re doing what they’re doing. If you’re an individual contributor trying to spread a complex idea, using a story makes it easy for people to understand and share.

Think about it. What’s easier to share for your audience: the statistics and analysis of landfill waste from US companies or the story of how Adobe Inc. brought its landfill percentage down to almost 0%?

No one likes a bragger who keeps talking about themselves. But at the same time, you know that you have to share your accomplishments to get credit for them.

You don’t have to be. Because it’s not sharing accomplishments that makes you a bragger, it’s how you share them.

If you keep saying things like: “I came up with idea x” or “I finished y” or “I saved the company z”, people will think you’re bragging.

If you instead use the story of how while helping your son with homework you had epiphany x, then that’s not bragging because it’s a nice story. You’ve managed to sneak in your accomplishment within the story itself. The funny thing is that you will still get credit for the idea.

Stories are a great way to share your accomplishment with others and not sound like a bragger.

If you take the Messaging Bootcamp, you learn to end your presentations with a call to action. The reason you do it is to make sure your audience is clear on what to do going forward.

For example, if you just presented on sales strategy in front of the team, then a good call to action could be to get them to implement at least one of the strategies on their sales calls next week.

Telling them what to do is not enough, because knowing and doing are two different things.

A good way to get them from the knowing stage to the doing stage is to inspire the team to implement. A good story will do the job. Maybe a story from your personal experience with the strategy, or maybe the story of another trainee who implemented the strategy and succeeded because of it.

You’ve probably heard before that people act because of emotion and then justify it later with logic. It’s true – if you want to get people to take action then move their emotions with a good story.

Storytelling will make you a better presenter. Just don’t overthink it and don’t hesitate.

I’ve been analytical all my life and used logic and reasoning to get my point across. I didn’t know what I was missing until I shared my first story at a lunch-and-learn I was running.

The moment I started with the story, I could see the group’s eyes light up. For the first time, I got a ton of positive feedback at the end and more interesting questions than I could handle. That was the day I became convinced that storytelling would be a part of my presentations going forward.