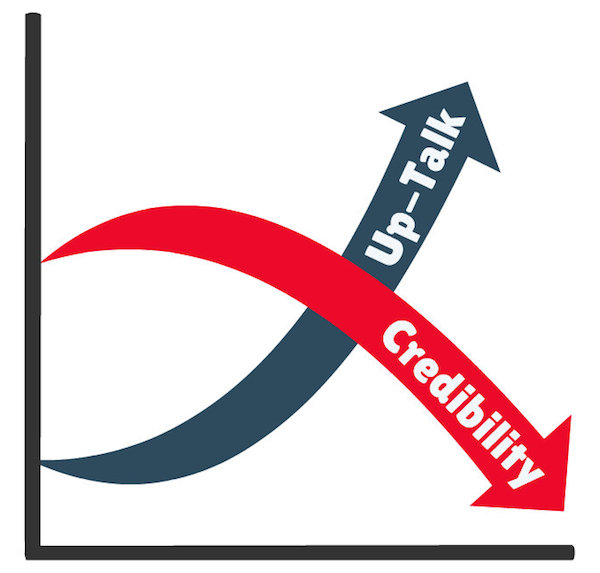 Both men and women uptalk. However, It’s interesting that my female clients recognize that they sometimes do uptalk, but my male clients usually don’t (even though they are just as guilty!).

So what is uptalk?

If you do the second version, your listener will not know whether you are giving them directions or asking for them for direction. Makes sense?

Check out the below interesting segment from Connie Chung in 1994 – This tells you the subject of uptalk has been around for a while.

What’s the opposite of uptalk?

The opposite of uptalk is “Declarative talk,” where your statements sound like declarations instead of questions. If you want to get a feel for declarations, read the first part of the Declaration of Indepence, and you will get a feel for that.

If you uptalk often, then you will give the impression at the conscious and unconscious level of your audience that you are not sure of what you are talking about.

Uptalk will give the impression that you are unsure.

Uptalk is not all bad, and you do not want to eliminate it. You want to just reduce it to a level where it does not impact your credibility.

What are appropriate situations for uptalk?

It’s great to use uptalk when you want to make others feel safe in mostly one-on-one situations. For example, when you give feedback to a boss, a coworker, or a direct report and you don’t want them to freak out and shut off because of your comments.

It’s important not to overuse uptalk even in the above situations. Utilize it just enough to reduce the resistance of others.

When is it not appropriate to uptalk?

You should avoid uptalking in almost all situations except in the above example of giving one-on-one feedback. Otherwise, your credibility might be at risk.

Is uptalk a male or female issue?

Women get accused of uptalk more than men, is there merit to this?

A study by Tom Linneman gives some statistics by analyzing Jeopardy contestants, “Gender in Jeopardy! Intonation Variation on a Television Game Show” in Gender & Society.

– On average, men who answered correctly used uptalk only 27% of the time.

– Women who answered correctly used uptalk 48% of the time.

The above statistics tell you three things:

2- If you are female, then you are more likely to uptalk than men. Or maybe people notice it more often when you do. Either way, you have to be more careful.

There are three methods that I use for myself and with clients.

1- Develop more awareness around how often you use uptalk.

Change happens after self-awareness. If you don’t think you uptalk, then you will never work on improving it. Right? So pay attention and notice if you uptalk often. Sometimes the awareness alone will do the trick and reduce your uptalk.

A note about awareness: please don’t mistake awareness for judgment. Being aware of something is one thing, beating yourself up for it is another. You want to get rid of uptalk, but in a gentle way otherwise, you will just emphasize that behavior.

The way I practiced changing my tone of voice from uptalk to declarative voice is through deliberate practice. I used to sit on a table and place a pen to my right side. Then I would command the pen to move to the left. I would do it again and again by saying “pen, move to the left.” As I am commanding the pen I pay attention to how the command sound feels in my vocal cords and my body; then I try to replicate that feeling when I am practicing my presentations.

Over time, I got a good sense of how a commanding voice sounded and was easier for me to replace uptalks in my presentation with this commanding declarative sound.

Do the same exercise with a pen or any object you like. The point is just to practice the tonality of command and declaration.

3- Always work on developing your sense of certainty.

Updating your capability to use declarative statements instead of uptalking is the first step. However, you also have to change the feeling behind the declarative statements so that you sound authentic. You can do that by building your beliefs in yourself as a leader. There are lots of articles on the website to help build your confidence and certainty. Please feel free to explore the blog and ask questions in the comments section.

The good news: with some practice, you can get rid of your uptalk habit or bring it down to an acceptable level where it does not undermine your credibility as a leader. 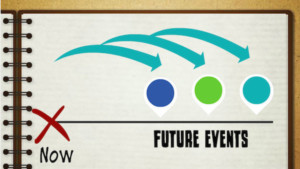 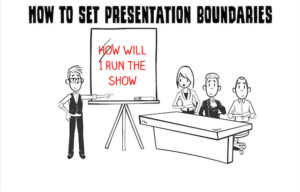