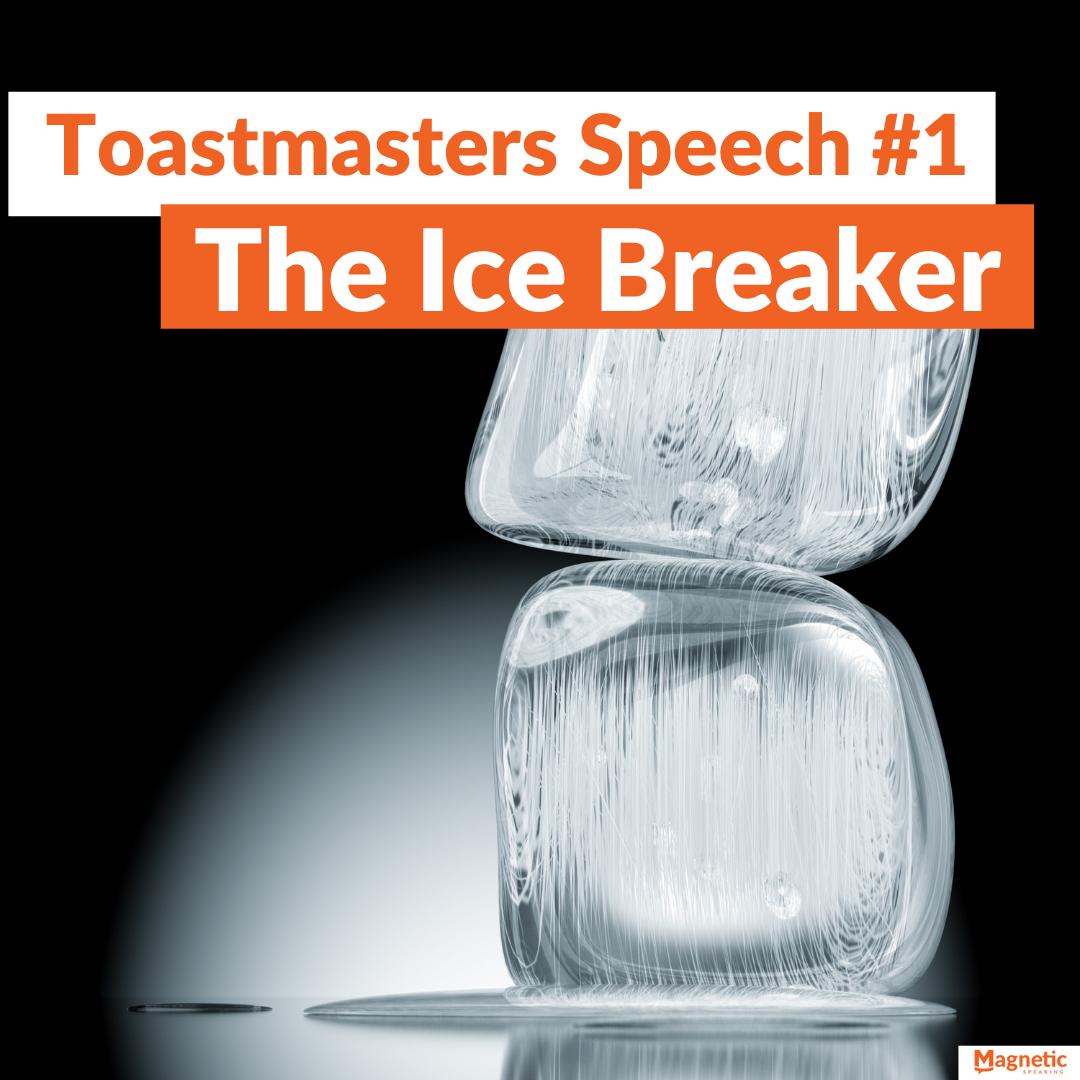 So you just joined Toastmasters and you need to do your Ice Breaker speech. Where do you start?

In this article, you’re going to learn powerful ways to organize, rehearse, and deliver your speech so that it resonates with your audience.

What is the Toastmasters Ice Breaker?

The Ice Breaker speech is the first speech you give at Toastmasters. It’s the speech that introduces you to the rest of the members in that Toastmasters network.

It’s often nerve-racking for people because they need to speak to a group of people that they don’t know.

But by following the advice of this article, you’ll learn how to do your very best on it and stand out from the rest.

Why The Ice Breaker Speech Is Important

This is one of the most important speeches that you’ll give at Toastmasters because it sets the foundation of who you are in everyone’s mind.

Coming in, most of the members will know very little or nothing about you. This is the first time you share with them who you are, what your interests are, what you believe, and much more that’s either verbally or non-verbally said through your energy and body language.

That’s just the reality of the Ice Breaker speech and this is the perspective that will last in their minds for a while until it slowly changes over time as they know you more.

Now, with all of that said, it doesn’t mean you should be trying to do a perfect job with a flawless speech. That likely won’t happen, considering you’re there to work on your speaking skills. Most of the members will have empathy and understanding of where you’re coming from when you present because they had to do an Ice Breaker speech too.

So, yes this speech is important but it also is okay to make multiple mistakes with it because it’s your first speech to the group. Plus, if you don’t do too well on it then you can only go up from there!

Just do the best you can, prepare how you can, and use this article as your guide.

Now if the topic (you!) feels too broad and overwhelming, here’s a list of topics to narrow the scope and get you started:

How To Structure Your Ice Breaker

Now you’re ready to go. You’ve decided on a topic (or even a few) and you need to structure your speech.

At a high-level, I recommend using what we call “The Arc” structure at Magnetic Speaking to section your speech into 3 parts. Generally, the 3 parts look like this:

By using this framework, it makes it easy for the audience to understand the different pieces and ensures that you don’t try to cover too many narratives at once.

Example: let’s say I was talking about why I decided to start doing public speaking. Here are some notes I would make to get started:

After breaking the speech up into 3 parts like that, you just have to fill in the gaps with the details you want to add. This approach should make it less daunting!

6 Rehearsal And Delivery Tips To Stand Out

With the structure and content set, you want to nail your delivery. What you might do is look at your whole script and try to memorize the whole speech. This is a recipe for overwhelm.

Instead, practice iteratively. Take the first part (the background) and practice that until it feels comfortable. Then practice the second and third parts before putting it all together.

The benefit of practicing this way is that by the time you are practicing the last part, you already feel comfortable with the first 2 parts! This will boost your confidence as you approach the big day.

2. Visualize your audience when practicing

This tip is simple and effective. By visualizing your audience when practicing, you’re familiarizing yourself with the environment you’ll be speaking in. Amazing studies have shown that your body will react to visualizations that your mind creates, so you can get some of those nerves out in the comfort of your own home.

If you’re on a video call, then imagine you’re on that video call. The benefit is still the same.

3. Speak to one person at a time

Imagine a sea of people looking at you. That’s what most people think of when they think of public speaking. But as we say at Magnetic Speaking, there is no such thing as public speaking, it’s just multiple 1-on-1 conversations.

When you’re delivering the speech, focus on one person at a time. Deliver a piece of your message to that person and then move to someone else. You’ll feel less nervous (like it’s a personal conversation) and each person in the audience will feel like you’re speaking to them (because you are!).

When doing your speech, you may feel nervous and that’s totally normal. Just be aware that when people get nervous they tend to go too quick with their speech and zoom through it as fast as possible just to be done with it.

Instead, take a few deep breaths before going up there. Deep breathing will help shift your body from a nervous state to a more relaxed state.

When people have a speech written and planned, they can get into their heads because they tend to try and remember exactly what they had written out which can cause a monotone speaking style.

Being monotone is when there’re no fluctuations in tonality, word pronunciation, energy, or other delivery skills that engage people.

Being monotone can be seen as boring, which can lose your audience’s attention. Instead, speed up your pace or drastically slow down your pace for emphasis at certain points of your Ice Breaker.

Something else people do when nervous is they don’t ever slow down when speaking. They just talk as fast as possible to try and keep the group’s attention. I know I’ve been guilty of this.

However, that only creates anxiety in the audience because they feel like they’re on a merry-go-round carousel that is only going quicker.

Instead, you need to let there be empty space, dead air, and silence at certain points in your Ice Breaker speech to let the audience gather their thoughts, catch up to what you’re saying, and process all the information.

Pausing can also be used to build up moments. For example, if your speech was about an experience you had, you could use pausing like this:

“Then I went to the lion exhibit. They were amazing animals because I felt the power from each roar, saw the striations of their muscles, and when the big one looked me right in the eyes…[pause]…I had lost my breath for a moment as I realized how insignificant my body compares to these creatures.”

To summarize, the Ice Breakers speech at Toastmasters is the first speech you give to that group. It’s the first time the members will get to know more about you and it’s your first chance to practice your presentation skills.

Everyone there knows that the Ice Breaker is nerve-racking and no one expects you to knock it out of the park; or else why would you be there?

When going into your ice breaker speech just remember to trust yourself, slow down, and do the best you can without beating yourself up afterward.

To see the ice breakers speech in action click here.