How to Disagree Respectfully in a Business Environment 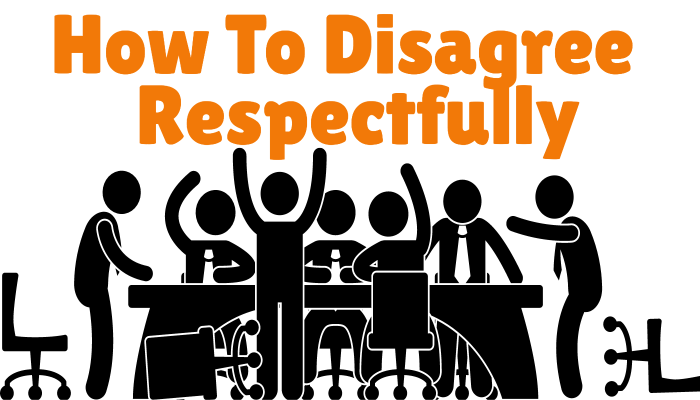 Disagreement is a healthy part of any business environment.

It’s ok if you don’t (leave it in the comments and would love to read it).

Disagreement can be done right if productive!

According to Gallup trust is a major ingredient in building high-performance cultures.

There are two ways to disagree:

There is a time and place for the rude and blunt disagreement for example at political rallies and debates, however, for business professionals, the polite and respectful approach is the way to go.

How Not to Disagree: 6 Wrong Ways To Disagree

Below are six wrong ways to disagree – read to see if you do any of them.

1. Disagreeing with the person, not with the argument.

Notice the difference between these two statements:

– you are wrong.
– what you are saying is wrong.

I know to you these might sound the same, but to the person receiving this disagreement, they don’t. The first one “You are wrong.” Will land more personally, and the second “What you are saying is wrong,” will land less personally. One is an attack on the person directly, and one is an attack on what they are saying. The difference is subtle, but the impact is big.

Notice the difference? One is a fact, and the other is a label on the fact. Which one will be more offensive to you? Most likely the second one because you don’t want to be labeled stupid.

Imagine you are presenting something, and someone keeps jumping in and saying: “Wrong,” “Not True,” “I disagree,” etc..

For you, this might bring back flashbacks of particular “presidential debates,” or it might be your current reality at work. This form of disagreement is conflict provoking and does not build trust and collaboration.

4. Blanket disagreements all the time

Sometimes you have to disagree with something completely, in most cases, things are not so black and white. Part of an idea could be bad, the part could be good, and a part might have potential with some tweaks. A blanket disagreement with ideas is good in some cases and bad in other cases.

Notice the difference between these two sentences

The second sentence has a partial agreement in it, and when applicable it will foster more collaboration and reduce friction in meetings.

Imagine you are in a group meeting, and you say something like “we need to get better at recruiting people.” Then your manager jumps in and says “whatever, let’s now talk about the corporate retreat.”

That’s an example of dismissive disagreement, and it could be offensive and hurtful to others.

This is when someone keeps jumping in saying “but, but, but,” continuously before you finish your thought. I know that some people take forever sometimes to complete their thoughts, and it’s important to stop them when needed and sometimes disagree. What I am talking about here is the compulsive and continuous “but” disagreement. This one is disruptive of flow, and usually, undermines the speaker’s authority, and will lead to negative reactions from everyone involved.

Now that we talked about how not to disagree, let’s talk about how to do it the right way:

The 7 Steps to Respectful Disagreement

1. Be ok with disagreement

To disagree with others, you have to be ok with the concept of a disagreement. Know that when the disagreement is done the right way it will help you and help the other person sharpen your ideas and it will lead to better organizational outcomes.

It helps to be a champion of respectful disagreement with your organization and train your team and colleagues to appreciate it.

Unfortunately, a lot of organizations ask their employees to challenge each other, but they don’t give them the right tools to do it the right way. Some of the top organizations we work with here at Magnetic Speaking bring us in to do workshops with respectful disagreement. The events end up being communication training and a team-building exercise because people for the first time realize that they can disagree with each other and still build rapport and trust.

2. Disagree in the right context

There is a time and there is a place for agreement and disagreement. When preparing for committee meetings, your college will appreciate your argument because it will make their presentations stronger.

However, they will not appreciate your argument if you hold back during preparation and you go all out during “showtime” with the committee.

This does not mean that you should not bring up disagreements during committee meetings when colleagues are presenting, it just means you need to be more careful when doing so. Sometimes it’s the intention of the disagreement: Are you doing it to look good or are you doing it to push for a better idea for your team.

Before you disagree, make sure you listen and ask clarifying questions. Sometimes the idea is good, but the articulation of the idea was in inadequate. Asking questions will help you understand more and help the other person clarify their thoughts better.

4. Use a framework to position your disagreement

A good example of a structure is the PREP model for disagreement.

Make sure you practice this framework until it becomes a ritual. When you disagree with someone, the first pause then shows respect, then express your idea without saying “but” and then pause again.

The only part of this formula that is not self-explanatory is the Respect part. Remember, the important thing when delivering a disagreement is to preserve trust. You can do that by demonstrating to the person you disagree with that you still respect them and respect their ideas.

In disagreements, it’s important to remember to preserve trust.

You can do it in many ways and here are some examples of what to say:

You can show respect by acknowledging that you are listening to the person.

Both of the above ways get respect by acknowledging that you have been listening.

By partially agreeing with someone, you demonstrate that you are listening and that you have something in common.

The partial agreement demonstrates respect because you at least agree with something they are saying.

You can show people respect by acknowledging and stroking their ego.

Examples of respect through Ego Support

This shows respect if genuine because it helps support their ego before you disagree with them. You just have to be careful with this one because it has to be real or it might sound like manipulation.

An example of Respectful Disagreement Using the Whole Framework:

Say someone says “Global warming does not exist.” and you disagree!

P= Pause. It helps to breath when you pause especially if you feel strongly about something.

R= Respect. You can use any of the respect showing strategies above. You might respond by saying “I hear you… many people say that, and I respect that.”

E= Express your idea without “but.” The trick is to avoid using “but” when you express your opinion. Notice that “but” is a habit and it wants to come out. It’s important to practice not saying the “but” to remove friction from your argument.

So you might respond this way “I believe that Global warming is the biggest threat to our civilization… in fact…. Etc.”

P= Pause. Then you just pause again and let the other person respond if they want to.

Here is the full version:

>> “Global warming does not exist.”

Pause…. “I hear what you are saying, and many people think the same way, and I respect that.” “ I believe that Global warming is the biggest threat to our civilization… in fact…. Etc.”

See how the disagreement was stated with respect and without the use of “but.”

What to do when people disagree with you the wrong way?

1. Know that they are humans and that they have bad unconscious habits. You probably have bad habits around disagreements too, and you are probably aware of some of them because of this article.

2. Treat the disagreement as feedback. Say “thank you for the feedback, ” and that will probably throw them off.

3. Start training your team and people around you on how to gracefully disagree and spread the learning.

4. Always be polite and respectful when you disagree. I understand that it’s hard to do it when the other person is being rude, and the practice under that kind of pressure will make you better at respectful disagreements.

5. If you get agitated or upset because someone did not agree with you, then just forgive yourself. I get butt-hurt all the time despite my years of practice. All I know is that I am getting better and better at this all the time and I don’t expect to be perfect all the time.

Disagreement is a healthy part of business meetings.

In this article, you learned how to disagree and most importantly how to (respectfully) disagree in a business environment.

Love to get your ideas in the comments below: