How to Sell an Idea to Your Team in 30 Seconds 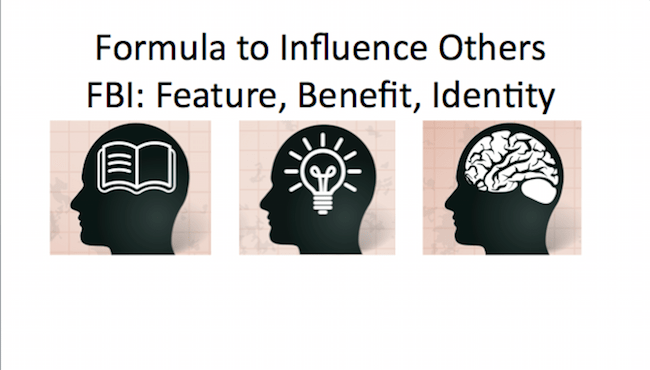 If you’ve tried to sell something to your team (or anyone) and it sounded like that, then you are in trouble.

Stringing together product features has never been able to sell anyone. What influences people to buy are benefits to them and their ego.

Technical and even seasoned business professionals sometimes fall into the feature/technology trap. Of course, we live in the Bay Area, and innovation is all around us. We work on things that are exciting, and we want to share that with the world. Unfortunately, the world does not care about what you are saying – unless you tell the world why it should care.

Video Clip: How Not To Present An Idea. Length: Only 1 minute

Here is how you make people care about your ideas:

The good news is that it’s not hard to share the benefits of what you are working on with others. All you have to do is follow a simple formula.

Can you say FBI? Yes, that’s the basic formula to selling anything.

F = Features. What are the main features of your product, service, or idea?

An example of features on a car:
1. Has four tires
2. Has a sunroof
3. It’s automatic

B = Benefits. What features benefit the user?

An example of the benefits of a car:
1. Has four tires > Adds stability and safety for your family
2. Has a sunroof > Adds more light to the car
3. It’s automatic > It’s easier to drive and park on San Francisco hills

I = Identity. What do the benefits mean to the identity of the person buying the product or idea?

Example of the identity appeal of a car:
1. Has four tires > Adds stability and safety for your family > Makes you a responsible adult
2. Has a sunroof > Adds more light into the car > Makes you the coolest dad ever.
3. It’s automatic > It’s easier to drive and park on San Francisco hills> Makes you look like a local driver in San Francisco.

I know. You found the features easy, the benefits harder, and the Identity is the hardest. That’s normal and expected. I struggled with these for a long time until they became second nature to me.

Below is an exercise that I used to get good at this. You just have to repeat the exercise a couple of times until your brain picks up on the pattern, and you will be good at it too.

Here is how you can learn to be more influential

3. Break the page into three columns

5. Start with features and fill as many as you can

6. Write or type a benefit for each feature. Don’t worry about repetition; some features might have similar benefits, and that’s ok.

7. Write or type as many Identity appeals as you can under each benefit.

Here is how it might look when you are done: 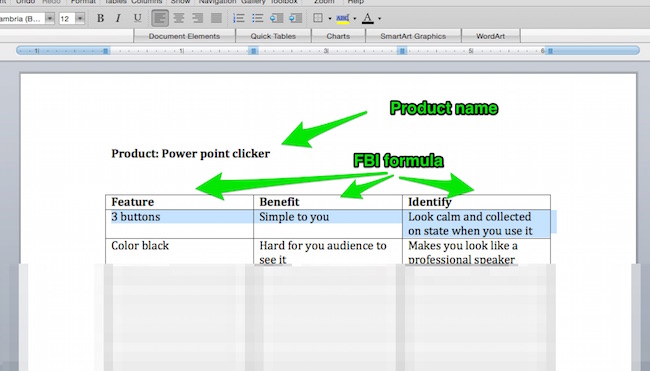 Doing this a few times is enough to get you thinking about these things. Soon after, you will notice that you are using benefits and identity appeals in your regular communications and presentations to your colleagues and clients. Management will start viewing you as the person who can give the technology your company is developing a meaning and purpose.

Imagine if Steve Jobs announced the iPod in 2001 by saying it has a 4 GB hard drive and stopping (feature). That would have been a disaster to the brand. Instead, Steve Jobs added that the 4 GB will translate into 10,000 songs ready for you to hear in your pocket (Benefit). Then added that you can carry your entire song library with you at all time which is a “quantum leap in listening to music” (appealing to the identity of someone that wants to look innovative).

Watch Steve Job talk about the iPod in the following video and watch him zip and zap through the FBI formula.

If you want to present like Steve Jobs or better, you have to start with the fundamentals. The FBI formula is the basic formula for selling anything. Start using it, and after a little while, you will find that you are using it often and adding your personality to it. That’s when the magic happens.