How To Speak Confidently To Leadership 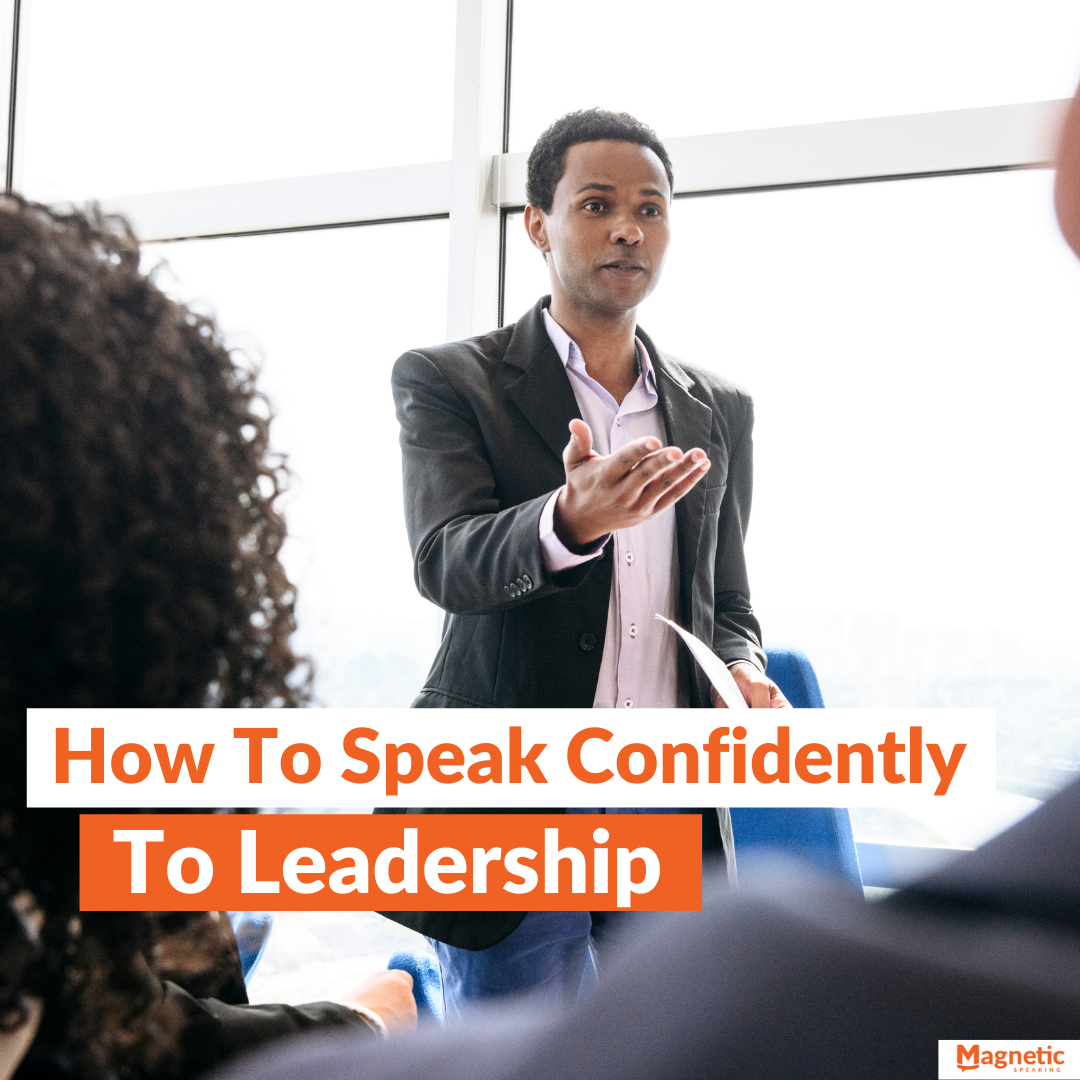 Something that we hear often is that speaking or presenting to leadership can be nerve-racking. I’ll hear from a VP that she is confident speaking in almost every other area except this.

It makes sense why speaking to leadership can be stressful. They’re your bosses and you want to do a good job and look good doing it.

But it doesn’t always have to be a stressful situation. There are ways you can confidently speak to leadership, it just takes learning some new skills and practice.

The first thing to remember is that you need to speak at a business outcome level. A mistake I see so many VPs make is jumping into the details of their business unit without thinking about the business outcome that the leadership team will care about.

Mentioning the cost savings and risk mitigation first is what we call “bottom-lining”. And that’s what leadership wants you to start with because it’s a clear business outcome.

Bottom-lining can be hard at first if you’re used to mentioning the details, but it’s a must if you want to get to the point quicker in executive presentations. It’ll help keep you concise and avoid getting lost in too many details.

Use stories and examples

When speaking to leadership, don’t rely on just reasoning to make your points. Think of a specific story of something that happened recently that backs up why you’re saying or presenting your information.

For example, if you’re trying to explain to leadership that users are experiencing a problem with certain updates on a software, don’t just say, “I think there’s a problem with the new software update because users are having problems.”

Instead, add to that by saying, “[…] For example, I was speaking with a customer last week, he told me that the update wasn’t letting him switch modules. He was experiencing frustration and I had to calm him. This is just one client of many who may be experiencing this. What this tells me is that we should immediately work on changing the new update that went out.”

That story bypasses their ability to question the integrity of what you’re saying because that’s a real paying customer, and it makes the point you’re trying to say.

If you do that, you’ll come off as more influential, persuasive, and look like you have strong leadership skills. Those are all traits that leadership likes to see and in turn, they’ll start to value your opinion more which will make you feel more confident about presenting to leadership and feel less nervous.

When speaking to leadership people often feel nervous. When they feel nervous they may talk too quickly, therefore reducing their credibility and lose leadership’s focus on what they have to say.

If this happens to you, you should bring in meaningful pauses to slow yourself down, calm your nerves, and give them a chance to understand what you’re saying. This is especially important if you’re explaining something technical or detailed.

To get better at pausing, you need to get comfortable with silence when you’re the presenter. Oftentimes when people speak they feel the need to fill every space with words or filler words like “um” or “you know.”

When trying to fill every space with words, it can detract from what you’re saying.

As you speak, if you need to pause to gather your thoughts then you should. Practice letting there be more space between your sentences. Get comfortable with the uncomfortable. The uncomfortable, for some, is silence.

Nowadays we’re all in this virtual world. Zoom meetings, virtual presentations, video conferences…etc. But just because you aren’t in person doesn’t mean you can’t have awareness of your body language.

When speaking to leadership in today’s virtual world you may have to do so through video. It’s imperative that you have strong body language on these calls because this window (the computer screen) is the only perspective your leadership will be viewing you for some time. Even after the pandemic ends, it won’t go back to business as usual the next day. Whether you realize it or not, the business world has changed forever. Instead of being upset about it going virtual, you should see it as an opportunity to be awesome in this new environment.

When presenting virtually, make sure you are squared up with the camera, having the camera at eye level, sitting up straight, and hands resting on your lap. Then as you speak to make your points use your hand gestures in a meaningful way.

There was a guy in a virtual private training we did not too long ago and he was slouching backward in his chair. It looked unprofessional and came off like he didn’t want to be there. However, he was the one who set everything up so I’m sure he wanted to be there, but it didn’t look like it.

We coached him to sit straight up in his chair and be squared up with the camera. Afterward, he looked fantastic, professional, and like he was the leader of the group; because he was.

Use a “commanding” tone

Have you ever noticed that when you’re nervous you start saying everything like it’s a question? With your tone going up? Like this? And you might do it as a matter of habit as well?

That’s called “uptalk” and it’s a silent killer to your authority in the room.

To eliminate it, you want to use a “commanding” tone. Deliberately practice moving your tone down at the end of sentences as if you are commanding someone to do something. If you’ve ever heard someone tell their dog to “sit”, you know what a commanding tone sounds like. It’s not aggressive but has a matter-of-fact authority to it.

When you first start working on having a commanding tone, it may feel different and hard to break out of uptalk. But over time, having a down-tone will come naturally and have you show up confidently to your leadership team.

Speaking confidently to leadership is one of the areas we spend the most time on with our clients for good reason. You need to be concise, impactful, and authoritative even when you don’t have the formal authority. Use the techniques above and you’ll be well on your way to poised and confident presentations with your executives. Trust me, they’ll notice.